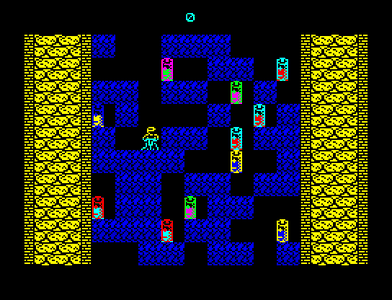 It's playable! I missed some scoring. / fikee

Interesting concept. Went to the end of the cyan level... / Euphoric

Mr. Drillerish, yet so simplified that it's almost pointless. Looking impressive for BASIC though. Better try again in 4K :-) / Cybergoth

Nice detail on graphics but scrolling is very clunky. No score hurts replayability and not enough strategy because you can't see far enough ahead. Mostly just playing blind. / vdub_bobby

This doesn't look bad for a game mostly in BASIC. It's a little bit slow, but that's not really a bad thing because you need to think while you play. The graphics are nice with good use of colour. However, it all seems a bit random as to how far you can get before the batteries run out. / Matt_B