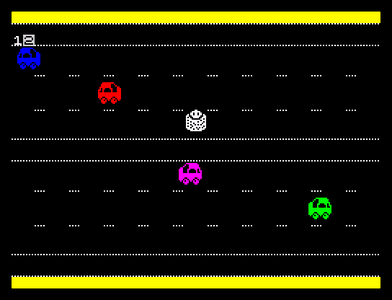 Nice looking, though some glitches. Nicely done, responsive controls. Collision detection is pretty iffy, though, and after a while the cars are moving so fast that it is more luck than skill. Better to increase difficulty through more cars than just through ramping up the speed. / vdub_bobby

Easily the best of the Spectrum entries. There's a nice sprite engine and the increasing difficulty with levels makes it very playable. The only thing holding it back is the lack of polish, with the scoring in particular looking a bit messy. / Matt_B