by Alyssa and The Exceptions 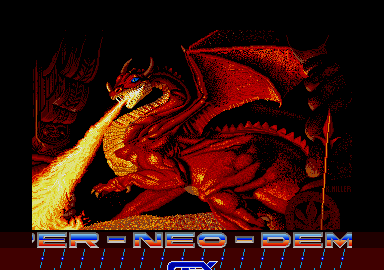 the exceptions strike again! originally we never wanted to write a demo again (no time!),but then our friend alyssa discovered how to remove the lower border of the poor tortured shifter. and so we coulnd't resist to create the super-neo- demo-show... Is it necessary to say that this little show was coded by -me-,or that the mighty musix were composed by robb and programmed by mad max ? just listen to the fantastic drums! Characterset and some of the pic's coming with our neo-show painted by Es. We think there is a lot of greeting to do: Hello to mmc(thanx for the demo of spectrum 512,guido!),acc(funny conversations on the phone,weren't they,richard?),dma,ator(what a shit-exec on that saturday night,eh,ator?),42-crew(bet you can't rip this music like some others ?),hcc(nice demo,boys!),srg,css,scc and dca. What's new at tex? Mad max has done the music from bad cat(he had only 4 days and no notes)and he will do the soundtrack from a game called "jules verne". The titlesong will be a 3-voice digitized tune! -me- will work on our fantasy-role-playing game,so does Es. Cracking will be done by daryl in the future... And now i'm giving the keyboard over to -me- : hello ! I hope this lousy program will work in a few minutes or i'll get crazy.... luckily there are only few raster interrupts to manage in our game.... movem.l.. swap.. rte.. aaarghh... So much for this time,folks,read the 'read me.txt' and then we wish you a lot of fun with the super-neo-demo-show!!!