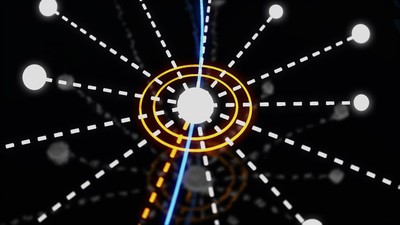 (text posted on the prod's page on Pouet - sorry for lack of proper italic and bold) At least unless an admin drops by and prettyfy it, you'll have to live with the tags just sitting there :)

During the development of the intro, Andro went to great lengths with the project. We used Slack to stay up to date and in touch all the time, and during the final stages of the production, Andro gave some really intense "speaches" to everyone involved.

I think they really display the amount he invested in this production, and decided I'd keep them and give the public a small view of what took place behind the scenes, and how much that guy put himself on the line and invested his very soul for months. With his (and everyone else) permission, I hereby bring you the transcripts of those epic moments on Slack. Comments by me in italic, Andro's posts in bold

About two months from Revision, the Poo-brain guys had built the intro tool called 65+ which had been stable for about a month, and got quite a lot of fundamentals for the intro in place. Scenes where slowly starting to come together, handdrawn concept art was being made, things looked all fine and dandy. Perhaps to a degree, where everyone involved got a little too confident that everything would work out. It would later become very apparent, that we really needed to pick up the pace to meet the deadline. But at this time, everything looked fine, and Andro took to the keys with this monster of a pep talk:

First off I'd like to say I'm amazed by the way all this is coming together, from a few months ago to now the difference in progress blows my mind.
Having only discovered the demoscene almost a year ago it's been a huge rollercoaster ride for me. discovering all the amazing things people have done and still can and will do.

This demo taking form was the result of a good few too many beers (as most are ;-) and me just saying to Wurstgetrank there was so much talent in Poo-brain i thought it was time to do a 64k.

I don't know everybody for that long and pushing people to get the ball rolling was hard, finding out who's 64k material and who isn't even harder.
After we finally got that storyboard meeting out of the way we decided what path we were gonna follow.

Man, I had no idea what I had gotten myself into. Even less so when everybody said you'll be directing this, your gonna make the majority of the demo, no pressure.. I'm really good at getting myself into things I'm un experienced with.. Go figure.

Crazy times , making it all in Touch Designer with Tropical Trevor (he dos the hard work) and then having it appear in a tool called 65+ ( like hats off mate, hats off ) , crazy months, so much switching up for me, I'm a noob with actual programming and its always been a mental shift switching it up. Especially when things just disappear that were gonna be implemented. lol..
Never mind 64klang2 popping in there at the last minute (mind blowing guys, that synth and how quickly you all got it to work, mind blowing..)**

Revision is 1 week from now, and everyone involved really picked up the pace. Stuff got done at a mindboggling pace like only demosceners can do. Every now and then, something spiraled out of a tangent. At that time, I'm pretty sure Andro felt like trying to keep track of every ant in an ant hive, and he took to the keys once more with this incredible speach:

Wurstgetrank called me up today, I have a few hours off (need it), and I realized I was so stressed out on that phone call, strung out, snappy, short fuse, all the things I don't want to be.

So the conclusion is I'm not acting how I want to towards myself and most importantly towards others.

I don't like telling people what to do, seriously, and now with the dead line approaching I have to do it more than ever ....
It's meant to be fun right.

And I've been doing that for months now, learning what individuals in the group are good at, and more importnatly what they're not good at. Ask people to act upon their strengths and they'll achieve greatness.

For quite a while now I've kinda been in the middle, the center of this team of awesomeness. I don't think anyones aware of the mount of time that I'm just chatting to people, trying to guide, trying to manage, people have a lot of questions and a "to do list" doesn't answer 60% of it.

Sometimes I'd just rather ignore you all and just code pretty shapes ;)
It eats a lot of time, a lot of energy. Super new to me.

So heres the thing, I'm directing right ?? Like I'm the director.
So right now I can't really handle it so well when i have people question things without trying to follow my vision.
But hey it's gotta be fun for the rest right ?

So wheres the line ? Do we make the end result not tie together because a coder or two don't agree with the directors decision on a certain shot or scene.

In my book ? no.. Theres only one captain on a ship.
Its a trust thing. Every time i try something new with raymarching, glsl, i have no gurantee it'll work, I find out by doing. So I need that for the last week of you guys, some trust, following my suggestions, my vision.

Like i said earlier, I'm just tired, not acting the way I'd like sometimes. Working on this for months.. I'm feeling it. Just kinda insecure with all this and people for some weird reason think I'm a pillar of self confidence.. lol.
This demo, the story, the visuals, the music, the whole thing. Sounds silly but hey it jus kinda feels very personal to me. Conveying whats been in my head and heart for so many months has been a trying valuable experience.
No matter the end result I'm gonna be so friggin proud and honored to have been part of this.

The framework is solid, exe works, clouds, 64klang2, all good right.
Were on schedule, its all going fine last time i checked, every time theres a commit, i see it all tie together more and more.

Why am I writing this ? Cause I have mad much respect with you guys and internet communication is impersonal.

Thanks for reading, let the silly jokes commence.

This was it - the intro looked and sounded amazing in the compo and the crowd applauded. Phew! I guess we all knew this one was something special, but only in our wildest dreams did any of us expect to win. But we did. The beam team accidently switched to the entry slide prematurely, preventing Andro's name from being shown. The one guy that was the mastermind of the production got cut from the credits. But it didn't matter. We were so damn proud, and after a few days, Andro took to the keys a final time:

Hey everyone,
First off I'd like to say congratulations to all of us for pulling off a win at the 64k entry at revision.

It still blows my mind, like well and truly.
Sometimes I feel like it hasn't really sunk in to be honest.
So i forgot to congratulate mercury, conspiracy , logicoma, all of you properly we won it all went ballistic. Speechless. Lost my mind.
so.....
More than half of what I'd like to say , well I already said it in my semi "here's that noob working on mad massive 64k prod but going mental speech".

So 1st up. Trevor. (Tropical Trevor)
Your ability to put this tool up during a crunch at work is something to be commended mate.
You put up with a lot off me during those 7 months, the good news is you won't have to again. ( and your girlfriend gets you back, I think ...... )
Thanks a million mate.

Richel. (Wurstgetrank)
You win the award for taking the longest to work on a scene(coastal). Mad props for that mate. You did mess up though by improving 65+ and actually doing a lot of shader work on the rest of the demo.

Roeltje aka shaderboi now to be forever known as "I know how to make shit roll y'all boi"
You delivered a great system which delivered, saved us months of animation time, you added the fairy dust to everything in motion and made the coolest hamsterball ever known in demo scene history. People friggin loved it.
Thanks bro.

Casper aka ze mighty Punqtured
My guide, my spirit animal, your humbleness and involvement since day 1 was a privilege to experience. You always had great advice for me , if it was with tech or how to handle all the bumps in the road. Your work on the soundtrack was amazing.That and a million smaller things.
Massive thanks mate.

Virgill and Gopher.
Thank you so much for allowing poo-brain to use not only 64klang 2 but also those hard earned jaw dropping sounds in such a short window of time.
I actually have no real clue how you made it all happen from audio tech to sound design.
All i know is that once the ball got rolling my jaw hit the floor each time something new came along.
You guys made something very beautiful. Thanks for sharing.

Maikel.
Thank you for getting my ideas out of my head and onto pen and paper, also for taking the time to let me learn how that process had to happen and how essential that visuals are to making a demo.
Your tweaks with lights, shadows and 100 subtle things really helped tie it all together in the last two days. eagle eye son. Nice one.

Thijs aka the proper bofty "glows gonna murder andro in every shader showdown till the end of time"
What can i say, stylish, on point, leaving my nerves hanging till the last minute ;) Excellent work with a very strong visual style. Your a proper bofty indian mate.

Steph aka Beftex.
You heard it all already x

So I kind of don't want to be seen as the guy that "brought poo-brain together", maybe i did , to be honest don't know.
All I know is this.
I was lucky enough to be taken under the wing of an incredibly talented bunch of indiviuals since a year ago. I was a part of a team.
After all the good and bad stress I finally figured out.
I'm not a bad director.Not a good one, but not a bad one.
I still have so much to learn.
But hey , in 2 days I can type out a basic raymarcher in Bonzomatic which ain't too bad for a noob. ( comin for ya Glow)
Still haven't stopped, never will.
I love the demoscene.
And all of you guys.
Thank you.

Punqtured: I did try to make it all pretty, but then found out a small limitation, that I'm trying to fix here: https://github.com/demozoo/demozoo/issues/296

Sorry about that. Let's hope we can fix that soon :)