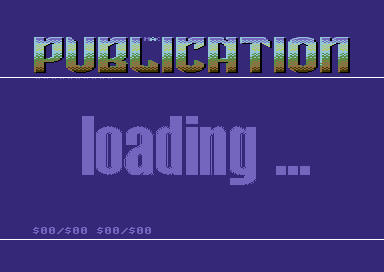 On december 6th 2001, Zeitgeist posted on c64.sk; "Now we've finally managed to release another issue of that German fanzine PUBLICATION. But hey: It's not German any longer. It's both: English AND German in just the same issue using a brand new magsys with elements of hypertext-languages. Should be up at our homepage by now. If not, you can download it here. This issue was supposed to be released at X2001, but I've emailed it just a couple of hours to late, so it wasn't. Therefore I hope nobody feels bothered by the occurence of "released at X2001" here and there. Have fun!"

Features a party report from Little Computer People 2001 (july 2001) and an interview with A. B. Mensch, programmer of Frogger '93.

The first disk comes with some productions and all the music from The Goat Tracker Music Competition (2001).