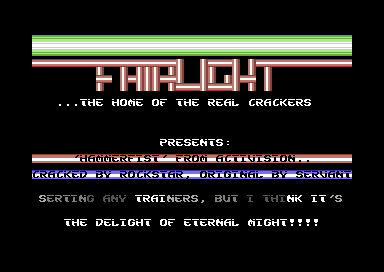 According to csdb, Rockstar was a member of Fairlight for just one month, from may to june of 1990, meaning this game had to be released in that time frame. We estimate may, since other releases of this game were made as early as april. This version of the game was 6 files totalling 692 blocks, making it just over 1 diskside.

Woodo is not credited in the intro, we know he made this intro since he was credited in other releases where it was used.