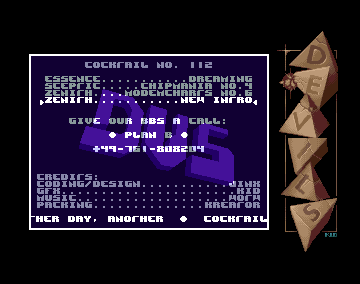 Deicide/TRSI appeared as a guest artist.

Release date is an estimate, based on the text "will be the last one before the party ii" in the scroller, indicating this was released just before The Party 1992, held between the 27th and 29th of december. In addition, releases on the pack are dated as late as december 17th, giving us a pretty good idea.

The disk is installed with the Imagination V2.2 boot by Zulu/Addonic.