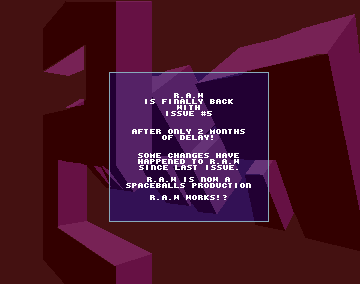 This was the first issue of R.A.W to be released for Spaceballs after the producers joined them from PMC at The Gathering 1993.

Features the picture The Deep by Peachy.

This issue announces the recruitment of two new editors; Macno/Abnormalia and Mount/Parasite. Peachy is inaccurately credited in the credits page as Peachy/TRSI, when in fact he was in Masque, which in turn was a TRSI subgroup. He is listed correctly in his news-editor credit. The release date is a guess, based on the fact that it was released a little after The Gathering, which was late april this year.